I have been described in the past as an active relaxer. I’d probably agree with that. Yoga and meditation bore me but running and gardening and alphabetizing are infinitely relaxing. Hosting events (even for a small group of friends) is something I find a wee bit stressful. Feeling responsible for the amount of fun everyone is having, also a tiny bit stressful. Remembering that I haven’t cleaned up before the morning of everyone visiting: stress sprinkles on the stress cake of life.

On account of the tiny riot that I fear would occur if I tried to institute running breaks in the middle of game-play to de-stress (though the rogue might be on board) I needed to find something else to do to keep my mind from shattering, the monsters from critting, and the PCs from having a miserable time. The best method of controlling my madness I’ve found so far is baking.

So there are some real draws to implementing the culinary arts while running a game. The most obvious being that there will be snacks! Snacks are a super awesome part of life and social engagements. They are not limited by categories other than “not a meal” which is great. Fresh snacks are even better, and as we move to the chilly (and awful) part of the year a warm cookie is perfect for keeping your lucky rolling hand thawed. Another benefit is that I am not a shit baker. This means that the foodstuffs are in most cases edible.

When you give people free stuff that is also not bad they generally say nice things to you. As a newbie DM, I am frequently (aka incessantly) concerned that the quality of the experience no es bueno. I receive confirmation on the not-shit-ness of the event when my PC’s bring up playing again. And also when they have not ostracised me. This can sometimes take a week or two to ascertain. But cookies get immediate feedback. Because they are cookies and they don’t take no shit from nobody. Immediate (usually) praise means I get to feel good about myself and feeling good about myself is an important part of not losing my typical level of cool.

On the opposite side of the equation, since the aforementioned time management skills, though existing, are sub-par; I am usually baking while the game is in progress. In the past, this has led to a couple of instances of dashing off mid-battle to check the doneness of certain tasty treats. So one can definitely feel an interruption to the flow of the game. I’ve also noticed that once a single individual moves away from the table there’s a bit of a domino effect and everyone else uses that as an opportunity to get a bit of a stretch on or to utilize the facilities (this means to take a wiz FYI).

This has the added effect of drawing out gameplay. We usually push upwards of 6 hours per session. This will include a nom-time break. It goes longer if people drink a wee bit less. And provided there has been ample opportunity to take a nap.

Although keeping your friend-humans confined in a dark room together is considered socially acceptable and totally something the cool kid would do… sometimes you really don’t want to be sitting on your tuchas all the livelong day. But getting back to the table (get it?), DM’ing does require at least a small measure of concentration or well documented notes. I tend to employ the former when remembering what the devil I’ve been forcing the PC’s to endure while the adventure is in progress. Besides, if I forget something they will definitely tell me. Adding another piece to the chaos puzzle (yes I do remember I said it was stress cake earlier…just shush) with the baking is not always 100% relaxing. In most cases there is the very real concern that my Demon Oven of Ass-hattery (CE) will be making the tasty things I love for their sweet, edibility into charcoal briquettes of disappointment (-3 to happiness if consumed). 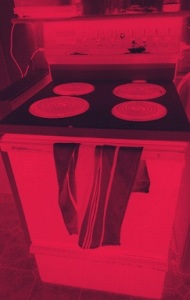 XP: None (Because you’ll never learn.)

Effect: Turns the hope of yummy goodness into pain and despair. The Oven waits for the user to become distracted then raises temperature to that of the Hellscape from whence it spawned.

Generally by the end of dealing with that, cortisol levels and heart rate have jacked themselves up to just the very best levels for maximum fight or flight response. If I’m lucky there is something laden with sugar to shove into my scream-hole to keep all of the feelings just as much inside as they need to be for a social event. If 100% of everything ends in ruin, there is bound to be a whiskey bottle hiding somewhere to dehydrate the tears from my body.

I guess I would say the most important takeaway from this is to always double your recipe so you have a second chance, just in case.

All-in-all, I would say that baking is currently my most effective method for managing stress. I would definitely recommend it! Now go have a cookie.